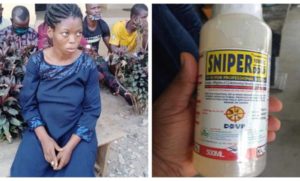 A piece of very sad information coming in has revealed how wickedness made a woman poison her stepson for been the favorite of her husband and also the care he gives the mother of the deceased boy.

The accused who is a 24-year-old pregnant woman by the name of Mariam Musa was arrested in Ede, Osun State which is in Nigeria after killing the 3 years old child.

The lady who is in her fifth month and a tailor was said to have confessed to the crime stating that his husband always wanted a son and since her second wife gave birth to a son he had given them more favoritism over her.

Miriam speaking about how it happened revealed that the three-year-old boy, Rokeeb, left his mother and came to her room on the day she committed the act, adding that she put insecticide in the victim’s mouth, which killed him.

She further went ahead to state that she couldn’t contain the guilt which made her confess to the act and give herself to the police.

Greed and jealousy made me to kill the son of my husband’s second wife. She had a male child and I was not happy that our husband was showing her more care,