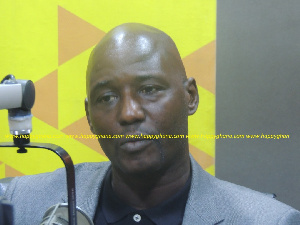 It was an honour playing for the Black Stars – Tony Baffoe

The Deputy General Secretary of the Confederation of African Football (CAF), Anthony ‘Tony’ Baffoe, has indicated apart from marrying his wife, some other memories he will never forget was his time playing for the Black Stars of Ghana.

Speaking in an interview on Y 107.9 FM’s Myd Morning Radio Show hosted by Rev Erskine, the former Black Stars captain recounting his fondest memories said, “My greatest moment was getting married to my wife in 1992 and having children who have being a blessing to us. Playing for Ghana was also special and I have not forgotten 13th January, 1991.

Noting that such things made him happy, the former Ghanaian international born in Germany sharing some of his happy moments in the Black Stars camp mentioned that the ‘gyama’ sessions got him into the mood.

Tony whose first experience with ‘gyama’ was with the Black Stars squad noted that none of his team mates in Germany sang when they prepared for matches. “In Germany, when we travel for games, no one sings or anything, we were all focused and the only music was usually from our personal head phones.

But immediately the black stars squad sat in the bus we started singing and I said wow. Because when you do that in Germany they will ask you what is wrong with you”.

On his authority, the unity love and bonds he saw in the team also moved him, especially as there were no boundaries between the different ethnic groups “and these are things I don’t want to forget. I always speak about Abedi ‘Pele’ Ayew who was my roommate and till today we are brothers”.

The former FC Köln defender was quick to add that all these were positive experiences and free lessons he has carried on to become who he is.