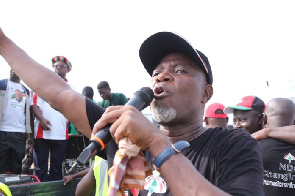 I’m sad for Bawumia, NPP using him to do dirty job – Sorogho

He observed, since Dr Bawumia was appointed a running mate for Nana Akufo-Addo when in opposition, the party loads him with duties that showcase him as a liar and make him a subject of public ridicule.

Alhaji Sorogho made this known on Inside Politics hosted by Mugabe Maase on Radio XYZ on Wednesday, after the Vice president addressed Ghanaians at a maiden Town Hall Meeting organised by the Economic Management Team in Accra.

Alhaji Sorogho believes Dr Bawumia churned out lies and “empty talk” to Ghanaians at the Town Hall meeting which was supposed to address the economic challenges the country is faced with, and stressed, the mockery and humiliation the Vice president was subjected to after the event made him sad.

“He is my muslim brother. I don’t like what they [some Ghanaians] are doing to him, but do I have an option? His lies has earned him that,” the former MP noted.

At the event, Dr Mahamudu Bawumia, among other things, attributed the recent depreciation of the Ghana cedi – one of the major challenges of the country’s economy – to directives from the International Monetary Fund (IMF).

“One of the conditions that the Bank of Ghana had to meet was to increase its net international reserves to the level of December 2018. To increase the net international reserves, however, meant that the Bank of Ghana could not sell any foreign exchange in the market. They had to essentially hold their hands to the back and could not intervene on the market during this particular period.”

“So demands for foreign currency was not met by supply as normally happens on a day-to-day basis, and we know when the demand is greater than the supply or the supply is not coming, the price will go up and this is exactly what was happening,” Dr Bawumia said.

This, he said, was one of the seven actions the government needed to do for the IMF board before the completion of the IMF programme this year.

He also announced the government had lessened the tax burden on Ghanaians, thereby bringing some relief to Ghanaians.

Dr. Bawumia further stated the economic fundamentals of the country were strong and that, it was not only good on paper but impacting Ghanaians positively.

But reacting to the issues raised, Alhaji Sorogho said the Vice president lied so he was not surprised Ghanaians had tagged him as “king of lies”.

“Dumsor [incessant power cuts] has set in and Ghanaians are suffering…Teachers, Nurses are crying for employment. The 1D1F, the 1 Village 1 Dam projects cannot be seen,” he said and argued that the government is not doing much to help Ghanaians, especially at a time prices of fuel, and commodities were soaring.

He said policy rate and taxes were not down as Dr Bawumiah had stated, adding that “he [Bawumia] spoke like he was in political campaign season to score cheap political points.