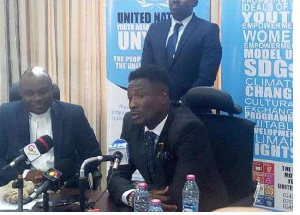 He said the youth had so much potential and when harnessed and channeled properly can be beneficial to the nation’s development.

He said this at a ceremony organised in Accra by the UNYA-GH to swear into office its Deputy Country Head, Dr Kwaku Assoku-Adjepong and three Goodwill Ambassadors, which included Asamoah Gyan, Arthur Paes and Mr Ali Ajami.

He expressed his gratitude for the honour done him to represent the youth through the Association and called on Corporate Ghana, Individual and institutions who had the youth at heart to support their projects and activities to build a better future for the younger generation.

He said his nick name ‘Baby Jet ‘and his dancing moves had diversely influenced the youth and was sure he was in the right position for the task as an Ambassador.

“We will start work as soon as possible, said Ambassador Gyan.

Mr Arthur Paes, an International Businessman and Philanthropist, said to empower the youth required a better education system of which was still a challenge in the country.

He said much efforts and resources should be channeled to ensure a better education system because the youth deserved the best.

Mr Ali Ajami, Chief Marketing Officer of Twellium Industrial Company Limited, said potentials of many youth across the country had been lost due to poverty and would work to ensure that such potential were put to good use.

Madam Lilian Sally Addo, Country Head, UNYA-GH, congratulated the four and urged them to promote the United Nations Resolution 2250, the 17 Sustainable Development Goals (SDGs) and support the work of the United Nations in building a better world.

She said the UNYA-GH was the only legitimate youth wing of the United Nations Association (UNA-GH) Ghana and all who wish to be part of the movement or support their projects should beware of fake organisations in the system.