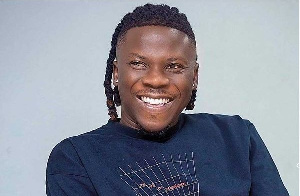 I will humbly accept the call to become Ashaiman MP – Stonebwoy

Award-winning dancehall musician, Stonebwoy, says he will humbly accept the call from the people of Ashaiman to become a Member of Parliament in the constituency.

Stonebwoy who has lived all his life in Ashaiman revealed that he’s championed a number of activities in his community which puts him in the position of becoming a politician.

The B.E.T award winner is confident that his popularity as a musician is capable of propelling him to become a politician in the future.

The whole issue about Stonebwoy’s ambition of becoming a politician surfaced when the Bhim Nation President was asked if he would welcome an offer from his fans to become the Member of Parliament for the Ashaiman constituency.

“I go run rough,” Stonebwoy said with seriousness adding that, “Is it not the same work I’m doing? I don’t sleep, singing always, supporting and serving people. So if someone hears Stonebwoy, they will even be happy. I have done all the activations, so am I not serving the people?”

“Now if they want the road to be done, we who have the influence have the mouth to speak to that effect. The position we play is bigger than a political side,” Stonebwoy stated on Joy FM, Saturday.

“I believe in affiliation but I will take my time and when the time is right I will reveal my party affiliation,” the musician said.