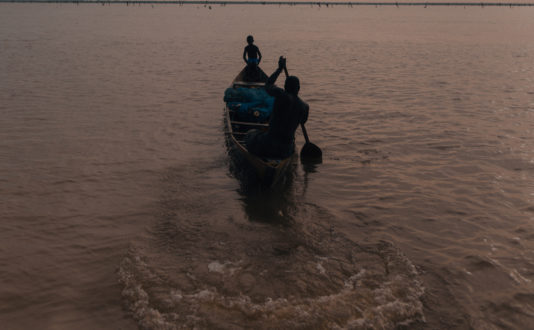 Human trafficker sentenced to 5 years in prison, ordered to pay ¢20k to victim

The Jasikan Circuit Court, in the Jasikan District of the Oti Region on September 20, sentenced a 45-year-old fisherman to a five-year imprisonment term for the offence of human trafficking and ordered him to pay a compensation of 20,000 cedis to the victim.

Spanning 13 months, the court proceedings started on August 12, 2021, where the accused, Issah Asilevi of Nkonya-Adjamasu, pleaded not guilty to the offence of human trafficking contrary to sections 2(1) and (2) of the Human Trafficking Act, 2005 (Act 694).

The accused, on 16th September 2021, engaged the services of a lawyer who represented him at the trial. After both prosecution and defence filed written addresses, judgement was delivered on 20th September 2022.

Coming at a time when the 14-year-old survivor, Khris, is now enrolled in school for the first time, this judgement brings relief to him and his family with whom he has been reintegrated.

Khris is the first of five siblings from Ningo Lotsubue in the Greater Accra Region. In 2016, his parents visited Nkonya-Adjamasu where the recruiter approached them intending to engage their son in fishing activities on the Lake. The recruiter promised an amount of GHC500 annually to Khris’s parents.

After he was given away for this sum, Khris lived and worked with his boat master on the Lake for five years with no access to education. While on the lake, his work included paddling the canoe and setting baskets and bamboo traps in the lake. Most days, he worked on the lake from midnight to noon.

Supported by International Justice Mission Ghana, the Oti Regional Police Command and the Department of Social Welfare (DSW) in the early hours of March 15, 2021, launched into Nkonya-Adjamasu to locate and rescue Khris and arrest his boat master, Issah.

After the rescue, Khris was placed in a private shelter for his care and rehabilitation. The DSW, with IJM’s support ensured the right care and psychosocial support for Khris. There was also a collaborative effort to conduct a thorough home assessment of his family before reintegrating him with a close relative–a joyful reunion after five years of being trafficked.

Khris is currently enrolled in school.

As IJM lauds this judgement as a step in the right direction in the fight against injustice, the mission commends the Oti regional police and the DSW for their diligent efforts to protect Khris and many children like him.

The Office of the Attorney-General, Ho is also commended for their diligent effort at prosecution.