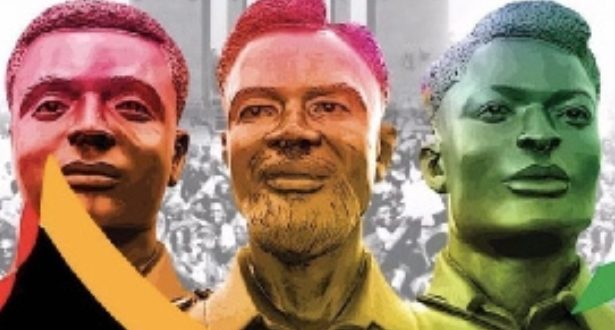 They were killed at the Christianborg Castle Crossroads

A special ceremony will be marked today at the Freedom Monument

The history of Ghana can never be told without the story of how three war veterans in the colonial era were shot and killed at the Christianborg Castle Crossroads on February 28, 1948.

Today, February 28, 2022, marks exactly 74 years since the trio died and Ghana will be marking this special event with a special ceremony at the Freedom Monument, near the Black Star Square at Osu, in Accra, state-owned Ghana News Agency (GNA) reports.

The end to colonial rule in the then Gold Coast was provoked after the three World War II veterans were killed leading to a major precursor to the country becoming an independent State on March 6, 1957.

The celebrated World War II veterans and their allied forces in the then Gold Coast Regiment of the Royal West African Frontier Force organised a peaceful demonstration marching to Christiansborg Castle, Accra, Gold Coast (Ghana), to hand in a petition to the colonial governor, demanding that they receive their end of war benefits and pay which they had been promised.

Their peaceful protest followed several appeals to the colonial government, which yielded no fruitful results.

The peaceful protest later turned deadly when they were intercepted at the crossroads — the exact location of the present “Freedom Monument” — by a contingent of armed policemen who shot and killed the three.

Before reaching the castle, the Veterans were ordered to disperse by the colonial police superintendent, Imray. When they refused, he opened fire on them instantly killing three – Sergeant Adjetey, Corporal Attipoe and Private Odartey Lamptey.

Imray was said to have killed the veterans after a subordinate he had ordered to do so had failed to execute the order.

The act sparked widespread uproar and condemnation, with people in Accra and other parts of the country taking to the streets and attacking European and Asian businesses and property.

Immediately after the outbreak of these violent disturbances the leadership of the United Gold Coast Convention (UGCC), a political organisation advocating an end to colonialism, sent a cable to the Secretary of State for the Colonies in London expressing their belief that:

“…unless the Colonial Government is changed and a new Government of the people and their chiefs installed at the centre immediately, the conduct of the masses will be completely out of control with strikes threatened in Police quarters…and result in worse violent and irresponsible acts by uncontrolled people.”

The UGCC cable further stated that:

“Working Committee United Gold Coast Convention declare they are prepared and ready to take over interim Government. We ask in name of oppressed, inarticulate, misruled and misgoverned people and their Chiefs that Special Commissioner be sent out immediately to hand over Government to interim Government of Chief and People and to witness immediate calling of Constituent Assembly.”

The people’s protests lasted five days. By 1st March the colonial governor had declared a state of emergency and put in place a new Riot Act. On 12th March the governor ordered the arrest of “The Big Six,” leading members of the UGCC, which included Dr. Kwame Nkrumah, as he believed they were responsible for orchestrating the disturbances. The Big Six were incarcerated in remote northern parts of the country.

It was around this time that Nkrumah and the other five began to have significant disagreements over the direction of the movement for independence. By 1949 Nkrumah had broken away from the UGCC to form the Convention People’s Party (CPP) taking the masses of the people with him.

The CPP, through a campaign dubbed: “Positive Action,” waged a successful anti-colonial campaign and achieved an end to colonial rule and the realisation of an independent Ghana on March 6, 1957.

Ex WOI Bright Segbefia, Public Relations Officer, Veterans Administration Ghana (VAG), told the GNA that, the commemoration of the Christianborg Crossroads incident was an important occasion on the calendar of the Administration.

He noted, the ceremony did not only honour the three veterans who were killed during the 1948 protest but all veteran officers who had contributed significantly to the security and protection of the nation.

WOI Segbefia charged the government to pay critical attention to the health needs of veteran officers as a way of showing appreciation for their service to the nation.

According to him, the veterans suffered various health complications but had no money to treat their conditions.

“They have to rely on their pensions and that is not enough to give them the best of care,” he said.