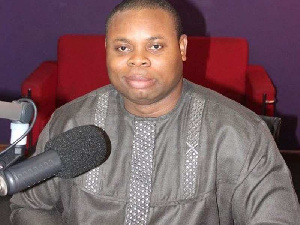 At the Supreme Court today, where the apex court was hearing a matter of an injunction on the gazetting of the New Patriotic Party (NPP) Member of Parliament-elect for Hohoe, Mr John-Peter Amewu, the phone of President of Policy Think Tank IMANI Africa was seized by the court in what has become a subject of trolls.

Franklin Cudjoe has been on a crusade against the disenfranchisement of “his people” at Santrokofi, Akpafu, Likpe, and Lolobi (SALL) because the Electoral Commission failed to allow them to vote in the just-ended parliamentary elections, a matter which was linked to Peter Amewu’s Hohoe mandate. In a unanimous decision Tuesday (January 5, 2020), a five-member panel of the apex court held that the Ho High Court had no jurisdiction to grant an injunction against Amewu.

While Franklin Cudjoe was in court observing proceedings, his phone rang which instantly caught the attention of the entire court, momentarily pausing proceedings for some few minutes. Justice Yaw Appau who was visibly upset about the disrespect to the court-ordered a court clerk to seize the phone immediately.

It is unclear what will happen after the episode but Mr Cudjoe later claimed his phone has been given back to him.