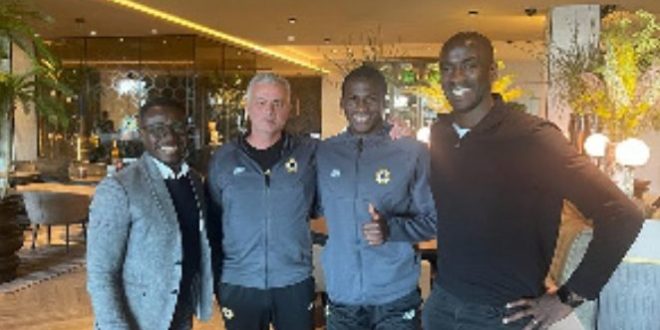 Share
AS Roma coach Jose Mourinho was impressed with Otto Addo‘s in-depth knowledge of Felix Afena-Gyan ahead of his impressive international debut for the Black Stars.

The two coaches met on 10 March 2022 in the Netherlands before the Italian giants faced Vitesse Arnhem in the UEFA Europa Conference League round of 16 first leg.

At the meeting, Addo, appointed interim Ghana coach for the 2022 FIFA World Cup playoff against Nigeria, told the celebrated Portuguese manager how he will deploy the 19-year-old striker.

Mourinho was fully convinced and knew his budding talent was going to be in good hands- and it turned out to be.

Afena-Gyan broke into the AS Roma first team in October last year and grabbed the headline when he netted a brace for the Giallorossi in their 2-0 success at Genoa in the Serie A.

His speed, irrepressible confidence, ability to run through channels and draw defenders to commit useless fouls are his qualities.

In addition, he has the knack of scoring goals as he proved it in the Primavera where he netted six goals in five matches this season before his promotion.

Last Friday, Afena-Gyan was named in the Black Stars starting line-up which drew 0-0 with the Super Eagles at the Baba Yara Stadium in the first leg tie and he hugely exceeded expectations.

He put on a mature performance like a seasoned senior international in a fully-packed 40,000-seater capacity stadium.

The former EurAfrica FC player lasted 80 minutes on the field and had to be replaced after picking up a minor injury.

He will be available for selection in Abuja on Tuesday, 29 March for the decider.

The winner will book a ticket for this year’s finals to be hosted by Qatar- the first-ever FIFA World Cup in the middle east.