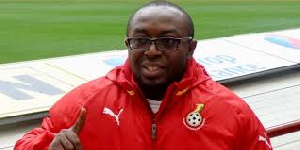 • He however believes that Hearts have solid team worthy of champions

Isaac Opeele Boateng, a former head coach of Kumasi Asante Kotoko has revealed the major cause of Asante Kotoko’s defeat to Accra Hearts of Oak.

Opeele told GhanaWeb that coach Mariano Barreto’s let Asante Kotoko down with how he deployed the team.

In the game, Brazilian poster boy, Fabio Gama who is a central attacking midfielder was surprisingly deployed as the main striker with Adomako and captain Emmanuel Gyamfi on the right and left flanks respectively.

Coach Opeele says this set up let Kotoko flat in attack as Gama lacked the physique to challenge the towering Hearts of Oak centre-backs.

Opeele in a GhanaWeb interview said that making Gama the main centre forward did not only limit Kotoko’s presence upfront but also limited their creativity.

“Barreto let Kotoko down. He tried to limit Hearts of Oak potent attack in the first half, but his false 9 with Fabio Gama did break down when the team sat too deep over the constant threat by Hearts of Oak,” he said.

Coach Opeele added that Barreto should have reverted to the 4:4:2 system and started two strikers to put pressure on the Hearts defence.

“He should have given Kotoko an arrow head or a target man to battle with the Hearts of Oak defenders but he went for false 9 tactics”.

Kotoko suffered a painful 1-0 defeat at the hands of Heart of Oak in a matchday 31 fixture of the Ghana Premier League.

Speaking after the game, Barreto said his players committed mistake and paid for that mistake.

“Everybody saw it was a very tough match, most of the people who saw this match, I think appreciate it,” Barreto said at the post-match presser attended by GhanaWeb.

He added, “We studied Hearts, they know our best players. In the first 45 minutes, no team had the chance to score because we were good in our transitions, our players did very well.”

Barreto stated, “In the second half, our target was to win the game and we started well but we made a very huge mistake.

Tags Barreto clash DOWN How IN kotoko let MARIANO SUPER

Previous Pumping a car tyre will now cost you GH¢2, here’s why
Next Will Zuma go to jail? ConCourt set to hand down judgment