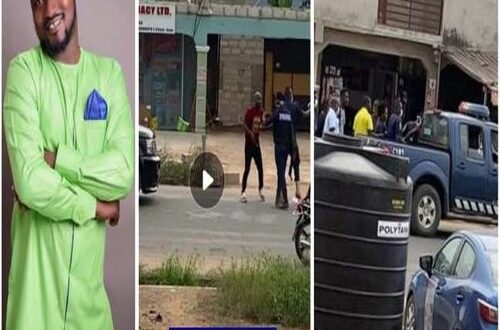 HOT VIDEO: How Police Officers Slapped and Dragged Funny Face During His Arrest

Ghanaian comedy personality, Benson Oduro Boateng known by his stage name Funny Face has reportedly been arrested by the police at Kasoa for unlawful discharge of fireman.

The Central Regional Police PRO, DSP Irene Serwaa Oppong in a JoyNews interview monitored by GhanaWeb said the comedian was arrested on Monday after he was engaged in an altercation with a drinking pub owner.

“On the 8th of February 2021, around 3:30 pm, the Millennium Police Command arrested the comedian, Funny Face in connection with an offense of discharging firearm in a public place.”

DSP Oppong in the interview explained that the police received a complaint from the pub operator.

A fight ensued between the bar operator and Funny Face in the bar when he visited the place.

Funny Face is reported to have left the bar following the fight and later returned with a pump-action gun, firing a warning shot at the pub.

According to her, Funny Face also reported the bar operator for assault and has since been sent to a hospital for treatment.

She stated that the comedian at the time of his arrest proved to be violent but was subdued and brought in by the police.

DSP Ofori indicated that the pump-action gun has been retrieved from the comedian and that the police have also been able to retrieve some evidence from the scene.

She adds that the police among other things will as part of their investigation seek to establish the true ownership of the gun and establish whether the comedian has a license to possess the firearm.