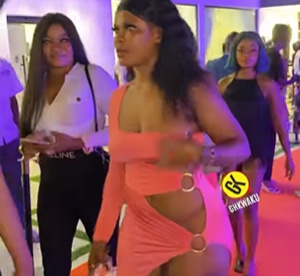 ‘Slaying’ took a different turn as some ladies who were spotted at Shatta Wale’s 38th birthday party left little to the imagination of the public.

These ladies thronged the Dancehall artiste’s residence with outfits which exposed their private parts.

Tacky, daring and racy as many described them, some of these dresses showcased boobs, upper thighs and almost parts of the vagina, in a series of videos which have gone viral on social media.

Netizens who spotted the said videos have questioned why such a manner of dressing should be condoned, especially at a time when issues relating to ‘indecent exposure’ has been under public scrutiny.

Unclear whether it was ‘opened to all’ or ‘strictly by invite’, Shatta Wale was treated to a surprise birthday party at his ‘Glass residence’ at South La estates, Accra.

Some of his business partners and colleagues including Medikal were present at the event.