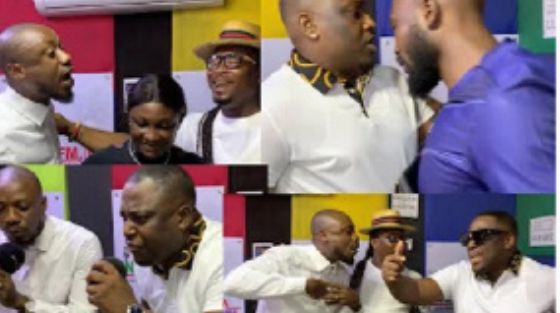 HOT VIDEO: Coded of 4X4 and Nkonkonsa in near fisticuffs at Neat FM studio

Share
Coded slams Nkonkonsa for not promoting his new single

Nkonkonsa labels Coded a ‘desperate’ being

What started as a simple discussion went sour when two showbiz personalities went head to head against each other in the studios of NeatFM.

This was after Coded of 4X4 fame, during an interview with Okay FM’s Ola Michael, lambasted Eugene Osafo-Nkanasah (Nkokonsa) for not promoting his new Amanpiano song titled ‘dada damoase,’ even though his colleagues were promoting it.

Coded, who claims to have a perfect relationship with the popular blogger, said he is fazed about the fact that he abandoned his song simply because he (Coded) isn’t as controversial as other artistes.

“I’ll release a song, you can tell the song is good but you want me to play a different role, you want me to pay before you post it. When your colleagues are posting it. Why?,” Coded angrily fumed at Nkonkonsa who sat next to him in the studio.

Before this development, Coded took to Instagram to attack and cuss out at Ghanaians for abandoning his new single.

In a video that made rounds on the internet, he was captured using swear words and labelling his fans as idiots for not promoting his ‘dada damoase’ song.

But in a response to coded’s fresh allegations particularly against him, Nkonkonsa established that he was responsible for making the ‘dada damoase’ song a hit.

He labeled the former 4X4 member ungrateful, adding that, he was the first to post his earlier outburst which made the song trend.

“Sometimes when these artistes talk out of pain I understand but they should be considerate, rational, and objective. The last song he released, I was the first person who posted it and you can ask him.

“I was the one who posted the controversy surrounding that dada damoase song. I could’ve decided to post just that and leave the song out yet I added the song to the video for promotion. Yet after all that you didn’t have the decency to call me. Ask him who has supported him from day one till now? Have you ever paid me for any of the favors?” he said.

After Nkonkonsa made his submissions, coded stood, looked Eugene in the eye, and angrily said:

“Must it be a negative story before you post it? Why should I even pay you? For the negative shit, you said? The song was already blazing before I made those comments. It was already on air. You didn’t make the song a hit. Don’t F**ken tell me that. Are you okay? How can you make the song a hit? Are you f**ken kidding me? I don’t need your f**ken post. F**k you.”

Eugene also stood up and angrily replied, “You are so desperate! You are desperate and I am not under obligation to promote you. Damn you!”

Coded threw his microphone on the table and tried storming out of the studio but he was stopped at the door.