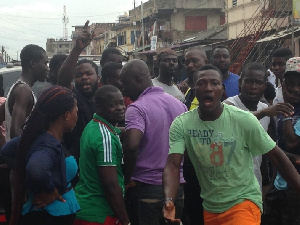 Traders at the Ashaiman market claim that the police do not take fraudsters through the necessary procedure when phone theft cases are reported.

On February, 15 a customer visited the Ashaiman station with a group of guys for revenge after he was duped by a phone seller days ago. According to witnesses, a floor tile shaped like a phone was sold to him.

Some witnesses told SVTV Africa’s DJ Nyaami that most often when the fraudster is arrested, he pays them off.

”This guy told me he began from Kumasi to circle and now he’s here. Sometimes when someone wants to buy a phone, we try to talk them out of it because he will give you a floor tile instead.

He also said the police know him so he gives them something and they let him go. Even as they have arrested him today, he will come back soon,” the woman said.

Kindly watch the full video below;