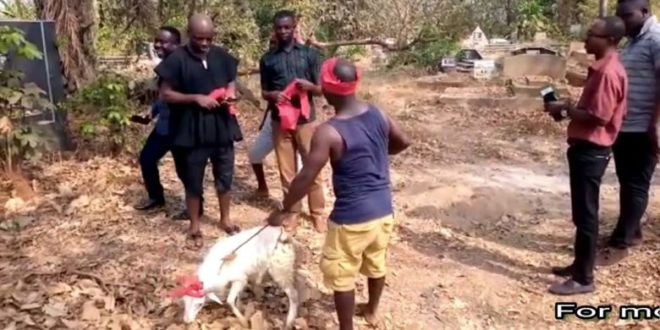 Hot Video: Abronye DC in Trouble! Given 72 Hours Ultimatum to reverse curse or else…

The Bono Regional Chairman of the New Patriotic Party, Kwame Baffoe popularly known as Abronye DC has been given a 72-hour ultimatum to reverse a curse he invoked on Monday, February 10, 2020.

The ultimatum has been issued by the Deku Family of Avernopeme in the Akatsi South District of the Volta Region.

The family wants the firebrand politician to reverse the curse directed at Yayra Koku or face their wrath.

A statement by Coker Gbedzaha, the Head of Family reads: “The attention of the above family has been drawn to a video currently trending on social media and a news item carried out by Adom TV mid-day news on the 10th of February, 2020 in which the Bono Regional Chairman of the ruling New Patriotic Party, Kwame Baffoe a.k.a Abronye D.C. was seen pouring libation and invoking the wrath of the gods in a cemetery and asserting that our son Yayra has alleged on his Facebook wall that he Abronye has been given five (5) of the 500 missing excavators.”

The statement continues: “We have contacted our son through a phone conversion and he has denied any allegations whatsoever and our further checks on his Facebook page to
authenticate Abronye’s claim revealed that no such allegation was levelled against
Abronye D.C.

“We are therefore giving Abronye D. C. 72hrs ultimatum to reverse the curse
through the same medium and render an unqualified apology to Yayra Koku and
the entire Deku family or face the wrath of Torgbui Zakadza of Nogokpo, Torgbui
Hogbatso of Atiavi, Torgbui Ga of Klikor and Torgbui Ga of Avenorfeme”.

The Bono Regional Chairman of the New Patriotic Party (NPP), Kwame Baffoe, popularly known as Abronye DC, on Monday 10 February 2020 charged the gods to deal with a Communications Team Member of the NDC, Yayra Koku.

Accusing Yayra Koku of linking him to the missing 500 excavators, Abronye DC invoked the gods to strike him dead.

With a sheep and Schnapp, Abronye who was pictured at the cemetery claimed innocence over the allegations and called on the gods to intervene by striking dead all his accusers.