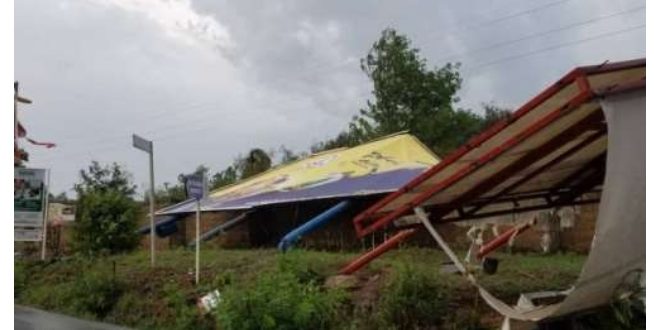 Classes one A and B of the EP Bankoe School were found with half their roofs torn off, leaving pupils at the mercy of the weather.

The storm detached the whole roofing unit of a classroom block of the SSNIT Flats School and carried it several yards across the compound, tearing the roof of another classroom in the process before landing after a close to a family residence nearby.

Pupils from four classes, basic one to three and basic six, have been forced to study under the shade of trees.

Books and other study material had been soaked by the rain and teachers and pupils were seen salvaging them to be dried out in the sun.

Heads of both schools reported no casualties as schools were out of session during the storm.

The MCE, who was in the company of the City’s engineers and officers of the National Disaster Management Organisation (NADMO), ordered roofing sheets to be provided for the affected schools for immediate reconstruction.

He said the Assembly would enforce laws surrounding the erection of physical structures and would ensure that buildings and other structures were of the required integrity.

The rainstorm, which started at around 1600 hours and raged for less than an hour, with strong winds that collapsed more than 20 major advertising billboards in the Municipality and caused varying degrees of damage to the roofs of homes.

Similar devastation was recorded across the Volta and Oti Region, which many had described as a rare occurrence or climate change induced.