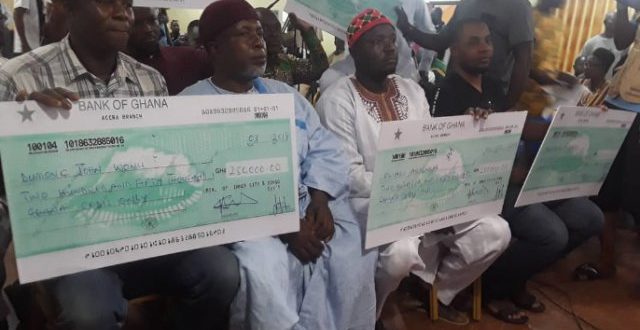 The government on Thursday, 7 March 2019 presented a cheque for GHS250,000 to each of the families of the seven victims of last year’s Asawase shooting incident as compensation.The separate cheques were presented to the families by the Minister of Inner-city and Zongo Development, Dr Mustapha Abdul-Hamid.President Nana Addo Dankwa Akufo-Addo announced the compensation package on Tuesday, 8 January 2019 when he delivered a speech at the Zongo for Peace and Development Conference, an initiative of the Ministry of Inner-city and Zongo Development.Presenting the cheques, Dr Abdul-Hamid said the payment is in line with Islamic principles and tradition.BackgroundOn 17 July 2018, the police shot and killed seven Zongo youth who they alleged were armed robbers at Manso-Nkwanta in the Amansie West District of the Ashanti Region.The families and community, however, insisted the seven deceased were “educated and well-known” members of the area, who were not thieves and, therefore, called for a probe into the circumstances that led to their killing.The government set up a five-member committee to probe the shooting incident.The committee, in its report, concluded that the seven young men were not armed robbers.The government decided, therefore, that: “The 21 police personnel involved in the incident who have been found to be the principal suspects, be interdicted by the police administration and subjected to formal police criminal investigation into the matter”.The government, in consultation with the families and community leaders, decided to provide support for the dependents of the seven innocent men who were killed.Source: Ghana/ClassFMonline.com