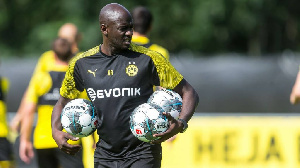 GFA on the verge of appointing Otto Addo – Reports

Ghanaians on social media have reacted to the reported appointment of former Ghana international Otto Addo as the head coach for the Black Stars.

Many doubt if the Borussia Dortmund talent coach is fit for the big role that has seen three coaches hired and sacked in the last five years.

According to some, Otto Addo is still in the learning process and thus he will be not a good appointment.

However, the Ghana Football Association (GFA) has reportedly held talks with Otto Addo with some reports also claiming that the latter has accepted the role.

Otto’s main competitor for the job is former Tottenham manager, Chris Hughton, who has the backing of the government.

@SawyerVilazBoaz also tweeted “I would go in for Chris Hughton because he is a more established coach than of Otto Addo who is still learning. But why do we have Chris bring a figurehead and Otto and Didi Dramani being his assistant?”

Previous Why GFA wants to appoint Otto Addo as Black Stars coach
Next 4 ‘sins’ under Mahama that have worsened under Akufo-Addo, Bawumia