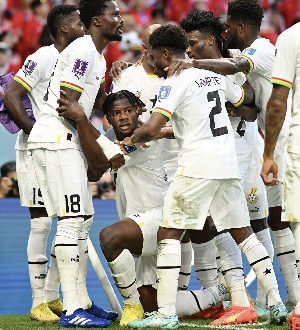 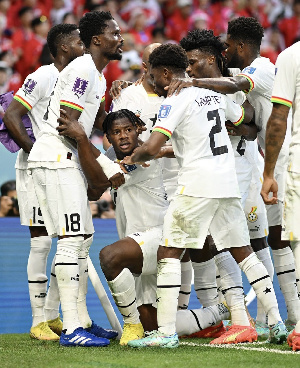 The Black Stars of Ghana won their first match at the 2022 FIFA World Cup in what was the most dramatic match as they beat South Korea 3-2 at the Education City Stadium.

The Black Stars had to sit on tight as the Koreans kept probing and pressuring Ghana in the final minutes of the game for an equalizer.

Mohammed Kudus who was one of the best Ghanaian players on the pitch scored twice in the game to give Ghana the win.

Mohammed Salisu scored the first goal for the Black Stars with a cross from Jordan in the 24th minute from a corner kick.

Exactly 10 minutes later, Jordan won another free kick after he was brought down on the right flanks.

The Crystal Palace forward later effected the free kick with a cross which found Kudus who scored to make it 2-0 for the Black Stars.

Ghana went into halftime with a 2-0 lead over South Korea at the Education City Stadium.

In the second half, Korea got back in the game as Cho Gue-sung scored twice with his head-to-level peggings for the Asians.

An error from Tariq Lamptey led Korea to swing in a cross which found Cho in Ghana’s box to score one of the goals on the blind side of Mohammed Salisu.

Having spotted Ghana’s weakness in the air, Korea whipped in another cross and this time Gideon Mensah was caught ball-watching as Cho scored his second in the game

When it all looked like it was over, Gideon Mensah apologized for his errors with a short across to Mohammed Kudus to score the winner in the match.

The goal was the first time Ghana had scored three goals in a match at the FIFA World Cup.

With 10 minutes of added time, Korea who were desperate for an equalizer kept on swinging more of the crosses but to no avail till referee Anthony Taylor blew the final whistle to end proceedings.