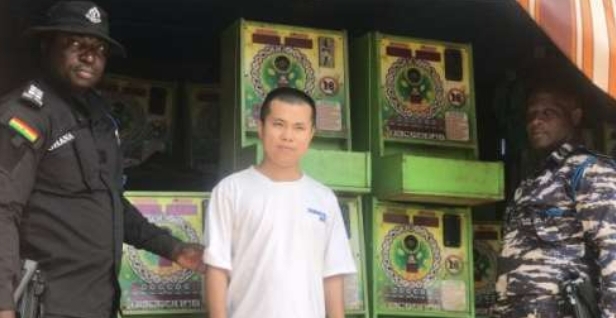 Share
The Gaming Commission of Ghana in collaboration with the Ghana Police Service has confiscated over 400 slot machines (jackpot) at Atasemanso in the Kumasi metropolis.

The exercise was part of measures instituted by the Commission to raise the standard of gaming activities by clamping down on illegal operators and patronage of underage school children.

The Gaming Commission of Ghana issued a notice to all gaming operators in 2018 to phase out all analogue and non-digital slot machines, popularly known as ‘Jackpot machines.’

The ban on analogue slot machines took effect on January 1, 2022.

Ms Beatrice Baiden, the Public Affairs Manager of the Commission, speaking in an interview with the Ghana News Agency (GNA) after the exercise, said the Commission was established to regulate, control and supervise the operations of games of chance in the country.

She said the directive formed part of the Commission’s efforts to upgrade the industry to meet international standards and best practices.

It also formed part of the regulator’s resolve to protect, especially minors from gaming while curbing the incidence of exploitation of the vulnerable.

“In 2021, we engaged operators of these slot machines on our intention to phase them out permanently from the system.

“We gave a deadline of December 31, 2021. So this means that anyone operating with such machines is illegal. In line with this we are enforcing the directive to ensure that sure machines are no longer within the system,” she stated

Ms Baiden revealed that due to their easy means of transportation and portable nature, children were often exposed to illegal operators.

“Minors are often exposed to these machines by illegal operators due to its easy transportation and portable nature.

“So today we are out on the field to enforce this directive so that minors are not exposed to the machines and to make it known to the public that these machines are no longer operating in the country,” she revealed.

Ms Baiden said the Commission had also engaged gaming operators on the directive and allowed them to adopt conventional digital machines of international standards, as an alternative.

Section 53 of the Gaming Act 2006 (Act 721) says “when we come across such illegal machines, we are supposed to confiscate them, send them to the police station and hand it over to them for care until the Board gives a directive on how to dispose of them,” Ms Baiden told the GNA.

She said the Commission would continue with the engagement with local authorities to intensify education on illegal gaming activities and underage gaming, adding that anyone found culpable would be dealt with according to the law.

Ms Baiden said the exercise was a shared responsibility and urged the public to assist the Commission by giving timely information about the activities of these illegal operators for action to be taken.