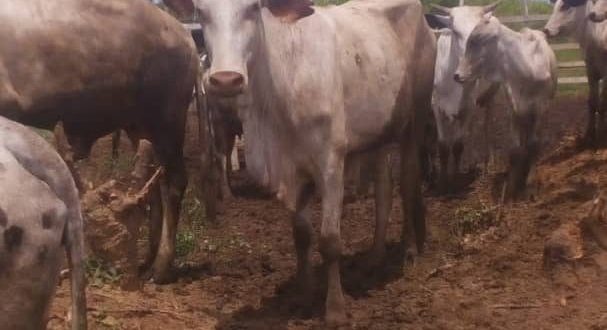 Bukari Issah; a middle-aged Fulani man was on Wednesday, November 25, 2020 convicted and sentenced to serve a 20-month prison jail term for stealing a cow.

Presenting the facts of the case before the Kintampo District court, prosecution, John Mensah stated that at about 7pm, on the evening of September 24, this year, the first accused (Bukari Issah), managed to sneak into the cattle farm of the complainant (Lukman Salifu), a butcher who resides at Dawadawa number 2, in the Kintampo North Municipality of the Bono Region and stole a cow.

He then sort the assistance of one Issaka Osman, the second accused to transport the stolen cow to Techiman under the disguise of offering it to a relative, who needed it to perform a funeral rites.

They were, however, arrested on their way to Techiman with the cow by night police patrol team. They were then taken to the Kintampo police station, where they were interrogated and detained.

The complainant, having heard of the rest of the accused, came to the police station and was able to identify the cow as his. The accused were then charged with stealing per section 124, subsection 1 of act 29-60.

During prosecution, the first accused, who pleaded guilty to the account of stealing was convicted by his honor- Maxwell Titriku. The second accused was, however, acquitted and discharged.

Animal theft is said to be in the increase in the Kintampo township and its environs. The area, said to be harboring nomadic Fulan herdsmen, is equally battling with on and off farmers-nomadic tango for some time now.