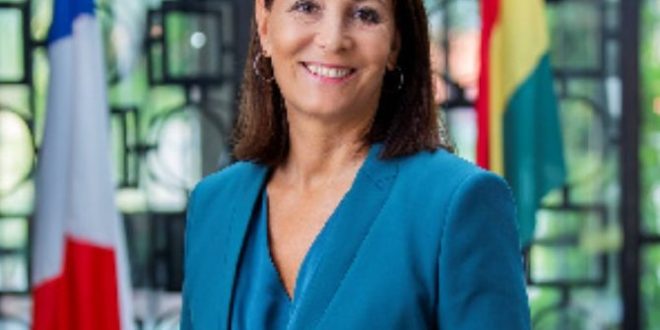 Share
The French Ambassador to Ghana, H.E Anne Sophie Ave has explained why Shatta Wale was left out of the Accra in Paris show.

The show was the first of its kind organized by the ambassador to promote Ghanaian Afrobeat as well as French culture.

The 23rd April concert saw some coveted artistes from Ghana like Sarkodie, Stonebwoy, Kwabena Kwabena and Fameye sharing the big stage with some decorated French artistes as well.

However, dancehall artiste, Shatta Wale’s absence at the event raised eyebrows as netizens contemplated what could be the reason for leaving out a “showstopper” from such a big event.

One netizen took to Twitter to question the French Ambassador on the issue.

In her reply, the ambassador revealed that there was a requirement for performing at the event and Shatta Wale didn’t fulfil that.

She said the concert was to promote duets from French and Ghanaian artistes but unfortunately Shatta Wale hadn’t done any collaborations with French artistes, hence his absence.

She promised to connect Shatta Wale to artistes in France if he shows interest.

Previous Pregnant women at higher risk of contracting malaria
Next VIDEO: Fadda Dickson flaunts his over $20,000 worth Ducati motorbike