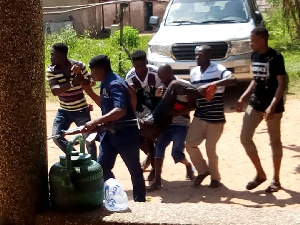 Four shot dead at installation of chief at Pai Katanga

At least four persons have been confirmed dead and two others critically injured at Pai Katanga in the Krachi East Municipality of the Oti Region, after they were shot by unidentified gunmen at the installation of a Kyidomhene.

The gunmen, said to be wearing in masks, allegedly stormed the installation ground and shot into the gathering.

Mr Samuel Aboagye, the District Police Commander, who confirmed the incident to Ghana News Agency said the Command has reinforced security to protect life and property.

He said efforts are being made to arrest the perpetrators.
GNA has gathered that the injured are receiving treatment at the Worawora Government Hospital and the dead are at the morgue of the Hospital.

Previous TRENDING VIDEO: You’ll be judged on the economy, not free SHS – Otumfuo to govt
Next Chief killed by speeding bus