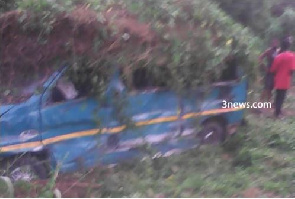 At least three persons are feared dead in a gory accident at Annkyernyin Junction near Apowa in the Western region on Saturday.

One of the victims had the head completely severed off.

The passenger bus was heading towards Takoradi from Agona Nkwanta when the truck coming from Takoradi, in an attempted to overtake two vehicles at ago, crashed into the mini bus.

The victims – dead and injured – were conveyed to Effia Nkwanta Regional Hospital.

The Assembly Member for the Apowa Electoral Area, Nicholas Nyarko told TV3’s News360 he was informed about the accident around 5:30pm.

“It was brutal,” he recalled as he narrated the chilling moment when he visited the accident scene.

“This is the first time I have seen someone’s head cut off through accident,” he said, noting three persons died on the spot.