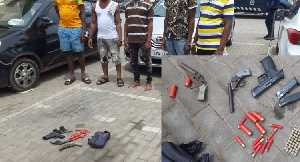 The Accra Regional Police Command has arrested five persons who are believed to be part of a car snatching syndicate in the metropolis.

Two others who allegedly buy the stolen cars from the suspects at a cheaper price and resell them to unsuspecting customers were also arrested.

Seven of the stolen cars have since been retrieved from the suspects after their arrest.

Two locally manufactured pistols the suspects allegedly use for their robbery operations have also been seized.

He said the two suspects in the course of police investigations led the police team to arrest Evans Nuertey, Abubakari Saddique and Prince Ayittey at Odumasi near Olebu and Mankrong near Suhum on March 18, 2020.

Narrating how the suspects operated to the media, DCOP Adu Anim said the suspects hire the services of their targeted drivers who are mainly taxi drivers to any location of their choice where they think they can strike.

“ In the course of the journey, other accomplices join the car and when they reach a point they attack the driver at gun point and seize the car together with any valuable that they find in the car.”

He revealed that police continuous investigations revealed that some of the cars robbed are re-sprayed by suspects and sold to unsuspecting customers.

“Some of the robbed vehicles are also used for other robbery activities of suspects.”

Adding, he revealed that suspects Ibrahim Muntari and Stephen Waje used some of the robbed vehicles to facilitate the robberies of four mobile money vendors at Alhaji Tabora, Lom Nava, Pokuase and Fan-Milk area.

The Regional Police Commander disclosed that upon interrogations suspects admitted to series of robbery attacks on mobile money operators within the Ga Central and Ga West Municipalities.

Stephen Waje and Evans Nuerttey were also identified as suspects who snatched a Kia Picanto Taxi Cab at gunpoint with an initial registration number GC 2094-19 but changed it to GE-547-19 at Sowutuom.

“Five of the cars were sold to Theophilus Kofi and Nii Okai at Suhum in the Eastern region and on the April 3, 2020, the Police proceeded to Suhum and arrested and brought the suspects to Accra together with the cars.”

He added that owners were yet to recover the vehicles.