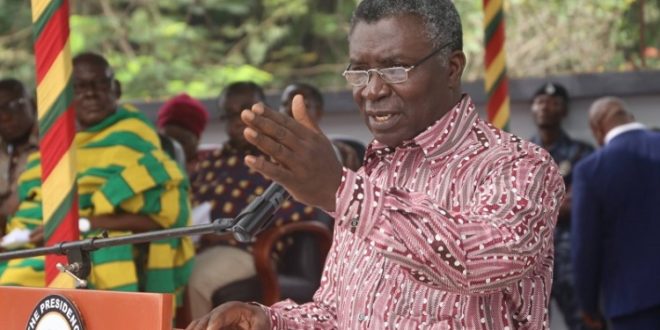 The embattled Minister for Environment, Science and Technology Prof Kwabena Frimpong-Boateng has appealed to the Police to probe a journalist working with Accra-based Peace FM and a national security officer in the ongoing missing excavators saga.

In a letter to the Police, the minister claimed the reporter used his NIB bank account to receive and distribute proceeds of the alleged sale of the excavators. 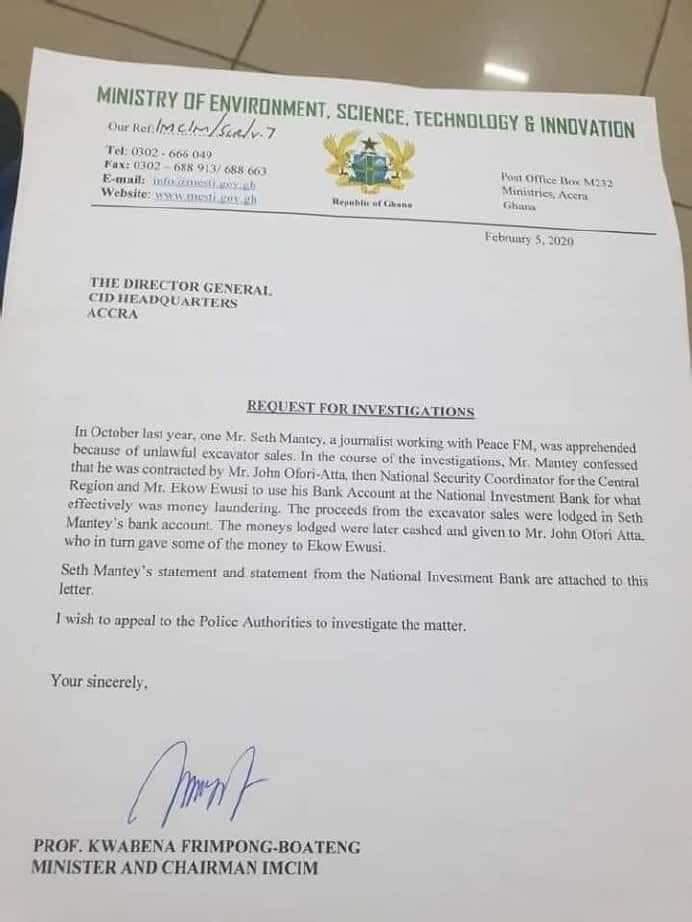 Meanwhile, the Agona West constituency chairman of the New Patriotic Party (NPP), Kojo Addo, who the Police say has been invited over the missing excavators’ saga has denied receiving any invitation from the state security agency.

According to him, the statement from the police was part of a grand scheme to frame the suspended deputy Central regional chair of the NPP Ekow Ewusi in the excavator scandal.

“Ekow Ewusi has not taken any excavator and I Kojo Addo, the NPP chairman for Agona West, has not be invited by the police anywhere,” fumed in a video making rounds on Facebook.

On Monday, February 3, 2020, the CID picked up Mr Ekow Ewusi, who is one of the leaders of Operation Vanguard, for interrogation over his role in the missing excavators and other equipment seized from illegal miners.

His arrest was triggered by a request from the Minister of Environment, Science, Technology & Innovation, Prof. Kwabena Frimpong-Boateng, to the Director-General, CID Headquarters, Accra, to commence investigations into the missing excavators and some other equipment.

“Mr. Ekow Ewusi was contracted to cart excavators and other vehicles and pieces of equipment seized by Operation Vanguard to designated areas for safekeeping. We have received information that he sent an unknown number of equipment to unauthorized locations, including one in Tema. This was confirmed by the caretaker of the depot in Tema. Information reaching me indicates that he has sold an unknown number of the pieces of equipment, including excavators. I wish to appeal to the Police Authorities to investigate the matter”, the letter dated February 3, 2020, and requesting the Police to probe into the matter in part read.

Following his arrest, the names of some persons believed to be his friends who have ample knowledge and at a point played a role in moving the excavators from its authorized location, have popped up.

One of such persons is the Agona West Constituency NPP chair who allegedly played a leading role in organizing some people to stage series of demonstrations against executives of the Central Regional NPP for suspending Mr. Ekow Ewusi.