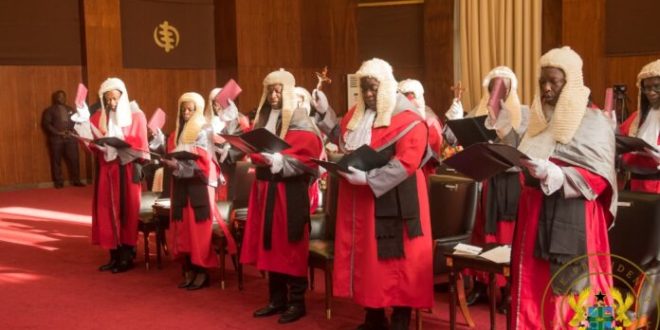 President Akufo-Addo has charged ten newly appointed Justices of the High Court to eschew all forms and temptations of corruption throughout their journey as judges of the Superior Court of Judicature.

In his address to the newly appointed Justices of the High Court at the banquet hall of the Jubilee House today 18 July 2022, after administering the oaths of allegiance, secrecy and judicial oath to them, President Akufo-Addo said a judge who engages in corrupt practices will certainly be a societal threat.

He urged the judges to ensure that they go about the adjudication of their cases in their courtrooms without fear or favour, ill-will or affection.

“It is essential that you exhibit that you are honest, possess integrity and a sound knowledge of the law. A corrupt or incompetent judge is a danger to the public interest and judicial administration” President Akufo-Addo said.

Responding to the charge of the President, Justice Mercy Adei Kotei, noted that together with her colleagues, they eternally grateful for the confidence reposed in them by the State to serve as judges.

“We promise to remain true to our oaths and to discharge our duties with diligence” Justice Mercy Adei Kotei said.

The newly appointed Justices of the High Court, are in two categories, first are Ebenezer Osei-Darko, Bernard Bentil, Alexander Graham, and Mercy Adei Kotei, who were all Circuit Court judges who have been elevated to the Superior Court of Judicature.