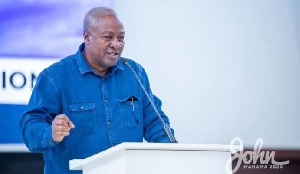 Private Legal Practitioner in Ghana and Member of the British Bar, Ralph Poku-Adusei, says the errors associated with the election petition filed by lawyers of the defected flagbearer of the National Democratic Congress (NDC), John Dramani Mahama, are unpardonable and same has dragged the legal profession into public ridicule.

“The mistakes, omissions and clerical errors in the petition as filed by lawyers for the NDC flagbearer in the just ended 2020 Presidential and Parliamentary elections are unacceptable. In fact, the nature of the mistakes in the petition reduces the confidence the public has in the Ghanaian bar as far as the standards and etiquettes of the legal profession is concerned and thus it will be prudent for the legal team to ensure that the mistakes are corrected at the earliest opportune time” lawyer Ralph Poku-Adusei said in an exclusive interview with Asaase News.

The duty of a lawyer to represent someone, be it an applicant such as in the instant case, or a respondent in Court is a sacred duty and lawyers are naturally enjoined to ensure that they have done due deligence before proceeding to act in a matter. The errors in the petition filed on the 30th of December 2020 could have been avoided if proper vetting of the petition had been carried out” lawyer Poku-Adusei added.

Former President John Mahama filed a petition at the registry of the Supreme Court on the last day of the twenty-one (21) day window allowed by law for a presidential candidate to file a petition against the results of a general election in the country (30th December 2020).

In conclusion the lawyer stated that given the all important nature of the instant Petition lawyers should be minded to ensure that such mistakes and embarrassment are avoided . Especially given the magnitude of the international interest in the matter .

Previous Enhancing the Image of Zoomlion through the media: Patricia Ofori Atta’s Perspective
Next New Speaker of Parliament will be anti-Akufo-Addo – Sulemana Braimah predicts