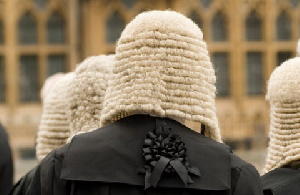 Mohammed-Mubarak Muntaka, the National Democratic Congress Chief Whip and Member of Parliament for Asawase, has alleged that a Supreme Court judge called a female MP-elect from the NDC and persuaded her to vote against the NDC’s nominee of Speaker for the 8th Parliament.

The NDC Chief Whip alleged that this judge was advocating for the governing party and was ready to offer the said female MP fuel for the four years of her parliamentary work.

Narrating this to Joy News on Sunday, January 10, and monitored by GhanaWeb, Muntaka stated further: “So shamefully, a Supreme Court Judge calls a colleague lady, telling her what they will give her. She has children, they will help her take care of her children. She can take fuel from a filling station for the four years,” Muntaka alleged.

He further indicated that the times the said judge called the MP has been recorded and the NDC caucus will investigate it.

Meanwhile, Muntaka countered Osei Kyei-Mensah-Bonsu’s claim that the NDC side bribed some MPs in the NPP fold to vote for Alban Bagbin instead of Prof. Mike Oquaye.

He quizzed: “In all these crises and being in opposition for four years, how could we have got all these monies to bribe those who are in government?” If you ask every candidate of ours, you virtually have to finance everything that you have to do…how could we have been bribing. The thing is that if you have bad leadership, that is what you have; you’ll be so scared of your own shadow.

“Hon Kyei-Mensah-Bonsu is a nice gentleman when you come to the workings of the House but as a leader, I can tell you he is a very terrible one. He doesn’t know how to carry people along.”

The Suame MP had earlier told Kumasi-based Angel FM that prior to the election of Speaker, he heard rumours that some of the MPs on the NPP side which he leads were planning to dissent against Professor Aaron Mike Oquaye.

Osei Kyei-Mensah-Bonsu had said on Angel FM: “I heard rumours that the NDC was trying to bribe some of our members to vote against Speaker Oquaye, so I quickly called those whose names were mentioned to speak with them. Others too had some unresolved issues with him and had said they would not vote for him. I met all those members in the hotel and spoke at length with them to rescind their decision, but it practically fell on deaf ears.”