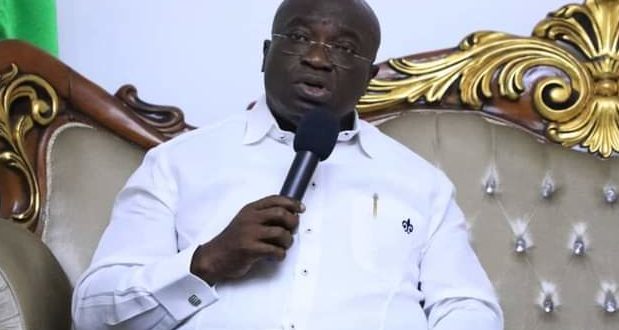 Share
Chima Obiwuru, a chieftain of the All Progressives Congress (APC), has accused the Governor of Abia State, Okezie Ikpeazu of abandoning governance in the detriment of people of the state for frequent political jamborees that has no direct positive impacts in the development of state’s economy and Infrastructure.
He was baring his mind on the background of the recent oversea travelings by aggrieved five Peoples Democratic Party (PDP) governors fondly called G-governors.
Recall that the five aggrieved governors had on Wednesday met their Bauchi counterpart, Bala Mohammed.
The meeting among the governors is holding less than 24 hours after Mohammed held private discussions with the PDP Presidential candidate in Abuja.
The G-5 governors have withdrawn support for Atiku, giving the resignation of Senator Iyioricha Ayu as National Chairman of the party as a condition for peace to reign.
Against this backdrops, the 2023 presidential Candidate of the opposition PDP, Atiku Abubakar insisted that the resignation of Ayu was not practical at this point in time, adding that he had moved on from the crisis.
However, Obiwuru while evaluating the impacts of Governor Ikpeazu’s frequent traveling with aggreived counterparts led by Wike in the development of Abia, which contained in a statement on Thursday, opined that it has become regrettable that the state governor shall be leaving nothing as a legacy, and frowned the alleged failure of Ikpeazu-led administration to address the pitiable condition of Aba, the commercial nerve center of the state.
He asserted that the Abia helmsman has wasted eight years in the office for political jamboree and profligacy, reiterating that it had equally be become shameful that a supposed scholar is leaving no tangible strides behind in the less than eight years of assumption of office as governor of Abia state.
Mr Obiwuru who is also a close aide to Abia State Gubernatorial Candidate of the All Progressives Congress for the March 2023 general elections and the immediate Past Minister of State for Mines and Steel Developement, Dr Uchechukwu Sampson Ogah, asked Governor Ikpeazu to tender apology to the people of the state for wasting taxpayer’s money in junketing around the globe with Governor Nyesom Wike as a personal assistant can’t be excused for his woeful failure.
His words: Shamefully and highly regrettable,this will be the state a supposed scholar will be leaving as a legacy in Abia state. What a wasted 8 eight years. Eight years of jamboree and Eight years of profligacy!
“Truth must be told, Ikpeazu must apologize to Abians, junketting around the globe with Gov. Wike as a PA can’t be an excuse for his failure.
“Abians should never think of voting PDP again, you can’t continue to make same mistake and expect a different answer”.
Similarly, the Chief Press Secretary to the Governor of Abia State, Onyebuchi Ememanka has dismissed speculations about the reason behind the recent visit of G-governors to Benue State Governor, Samuel Ortom.
In a statement on Thursday, Ememanka explained that the aggrieved Governors of the PDP were in Benue to show solidarity with their colleague, hinting that the visit was part of the plans to strengthen the party at all levels.
According to the spokesman, “these Governors cannot continue to wait on the wings of indecision and allow other parties erode traditional PDP stronghold states.
“Elections are not won in Abuja but locally at the various units in the state. These governors have absolutely nothing against the presidential candidate of the party,Alhaji Atiku Abubakar”.
CLICK HERE TO DOWNLOAD PRESS RADIO MOBILE APP

Ememanka further hinted that the grouse of the G-governors is for the PDP go into the forthcoming general election with its house intact and carrying every geopolitical zone along.
Source: Thepressradio.com| Nigeria| Emeruwa Emeruwa
Abia APC Stalwart Ikpeazu 2022-11-11
admin
Share