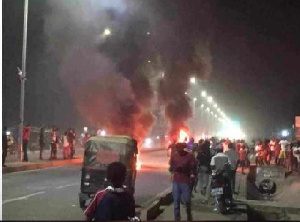 Calm has been restored in Tamale this morning, Friday, 11 December 2020 after police fired warning shots to disperse some supporters of the opposition National Democratic Congress (NDC) who poured onto the streets to support their flagbearer’s rejection of the 2020 parliamentary and presidential election results last night.

The youth, who chanted war songs, burnt tyres in the middle of the road at night in many places in Tamale, shortly after Mr John Dramani Mahama had, in a press conference, announced he was rejecting the results announced by the Electoral Commission.

To maintain sanity and peace, the police were deployed onto the streets and fired warning shots to disperse the crowd.

Mr Mahama and the NDC said the elections have been rigged for the incumbent, hence their resolve to reject the results.