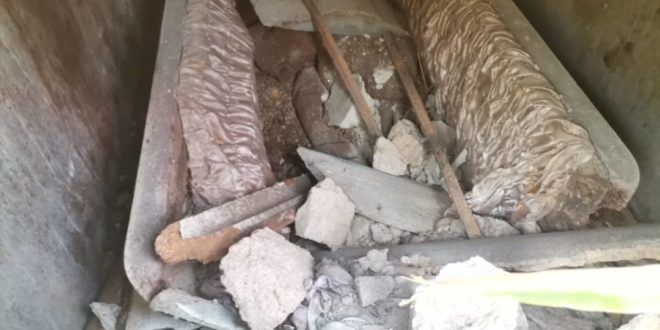 Share
The police in Ejisu have arrested two men for allegedly exhuming  12 corpses at Ejisu-Krapa No. 1 in the Ashanti Region.

The suspects Yaw Samuel, 27 and Nana Kwame, 29, are reported to have spent three weeks in the cemetery searching for human remains for a business only known to them.

Speaking to OTEC News Kwame Agyenim Boateng on Thursday April 7, 2022, the Acting Chief of the area Nana Nyamaa Boadi said the suspects managed to get a suck full of human remains after three weeks of breaking graves at the cemetery.

He added that the first suspect, Yaw Samuel who’s a stranger in the area was arrested on Sunday April 3, 2022 after he attempted to sell some of the human remains to another person in the community who posed as a buyer.

“The buyer, a native of Krapa marched the suspect to the chief’s Palace. Upon searching his bag, some bones suspected to be human remains were found”. He said.

It was later in the the day when he lead police to his hideout in the township to retrieve a suck full of suspected human remains.

The other Suspect, the chief noted was arrested after he went to the police station to visit his accomplice.

The two have however been remanded into police custody by a court at Juaben.