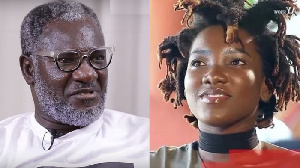 Father of the late Ghanaian dancehall artiste, Priscilla Opoku-Kwarteng who was known by all as Ebony Reigns has stated that he has not failed in managing his record label.

According to Nana Opoku Kwarteng who is now referred to as Starboy Kwarteng, he started the record label to continue with the good work of his daughter. He shares the label was also set up to raise talented artistes like his daughter who were not getting any support to push their music.

Asked why he had not signed any artiste yet in the past years, he told host, DJ Advicer on Happy 98.9 FM’s Ayekoo After Drive Show, “I had an issue with my first signee Kimore but I am going to sort them out. I traveled and after a while, we stopped communicating for reasons best known to her. But now that I am back, I intend to put things in place, get to know why we stopped communicating and move on. But for failure, I know I haven’t failed”.

He went on to say, he was not riding on his daughter’s fame to start the record label but rather, he did it in honor of her. “And I also want to help other upcoming artistes grow in the industry”.

“It’s unfortunate that things didn’t go as expected with my first signee. But I still don’t see that as a failure in any case. I am still doing my best and you mark my words, this record label is here to stay”.

Starboy Kwarteng disclosed, he is currently working with a new signee who means business. “He means business and I know you will love everything he does”, he stated.

Previous My life has been full of bad choices, heartbreaks – Mzbel
Next Why Zanetor, Kimathi Rawlings are trending after J.J Rawlings’s funeral