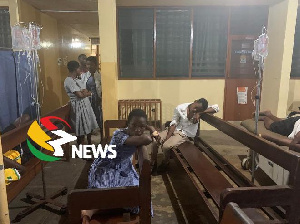 Some 150 students of the Accra High School have been rushed to the Adabraka Polyclinic after eating meals served them at school.

Information available to 3news.com indicates the students complained of stomach upset after taking the meals and were subsequently rushed to the hospital Monday dawn.

They are all suspected to be suffering from food poisoning and diarrhoea.

The students are mostly final year students staying in a private hostel run by the school.

Speaking to 3news.com on anonymity, a parent of one of the affected students said he received a phone call from school authorities asking him to come settle bills of his ward who had been rushed to the hospital.

According to the parent, the students have been complaining of the meal served them at school for a while but authorities have turned a deaf ear to these complaints.

The parent said the authorities say they do not have the required funds to provide ‘good’ meals for the students.

Previous I’ve paid your husbands, so, Christmas’ll be great – Akufo-Addo to wives of contractors
Next Ghanaian students are spending over $129m on fees in the U.S. – Report