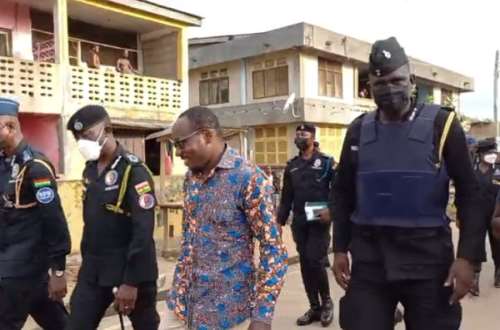 Dampare visits Ellembelle over clashes between Youth and Police

Share
The Inspector General of Police (IGP), Dr George Akuffo Dampare, on Saturday called on the Esiama Divisional Police Command to acquaint himself with developments that led to bloody clashes between the police and youth of Anwia and Teleku-Bokazo.

The incident was in connection with the alleged killing of an indigene of Teleku-Bokazo, Mr Andrew Donkor, 33, and injury to four others.

The youth of Anwia and Teleku-Bokazo, in the early hours of Saturday, allegedly besieged the Esiama Police Station to demand the unconditional release and bail for their counterparts who were arrested on Adamus Mines concession at Teleku-Bokazo for engaging in illegal mining (Galamsey) activities on Friday dawn and arraigned at the Nkroful Magistrate Court.

As part of the protest, the youth vandalized louvre blades on the frontage of the Police station and smashed the windscreen of police vehicles.

The IGP’s visit was, therefore, to assess the extent of damage and bring the perpetrators who caused the mayhem to the police station to book.

At the Chief’s palace at Teleku-Bokazo, the IGP told the Chief that the CCTV cameras at the station had captured 30 of the youth who vandalized property at the station.

Dr Dampare told the Chief that the Police Command would mount a search and arrest those captured on the CCTV cameras.

The IGP was accompanied by the Esiama Divisional Police Commander, ACP Godact Hlordzi and the Western Regional Police Public Affairs Officer DSP Olivia Adiku, among others.