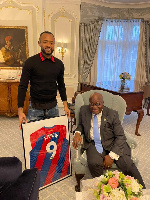 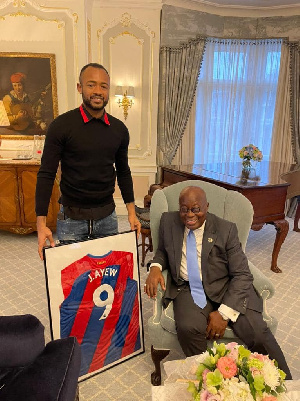 Crystal Palace forward Jordan Ayew met President Akufo-Addo in his hotel in London for a short chat and presentation.

The President was in London to promote a tourism project called “Destination Ghana”. The event is the first in a series of activities of the ‘Destination Ghana’ project, which has, at its core, the objective of inviting and welcoming the rest of the world to visit Ghana.

Jordan Ayew gave the President a framed and signed Crystal Palace jersey with his name and squad number on it.

The Black Stars striker was in fine form against Arsenal FC in the English Premier League. He scored the Eagles’ second goal which was his second of the season.

The 30-year-old striker has played 26 games in the Premier League and assisted three goals. He featured in Ghana’s World Cup playoff doubleheader against the Super Eagles of Nigeria. Ghana booked a place at the 2022 FIFA World Qatar which will be held in Qatar through the away goal rule after 0-0 and 1-1 results.