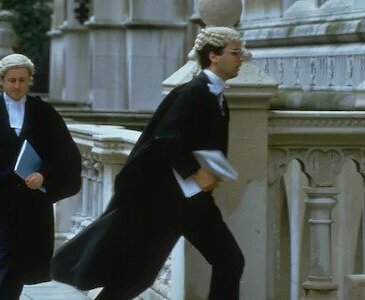 Coronavirus: Drama as Lawyers run away when suspect coughs in court

A dramatic scene was recorded at the Osun state magistrate court in Osogbo, after a suspect identified as Ige coughed while his two-count charge of assault was being read.

The suspect was arraigned in court alongside Rasaq Sunday, Wasiu Adeyanju and Samson Ogunleye for assaulting one Lateef Kareem on April 6, at Olugun street in the state capital. They reportedly used broken bottles and cutlass to inflict injuries on Kareem’s hand.

However while the charges were read, Ige began coughing (persistent cough is one of the known symptoms of COVID-19). Three lawyers who sat in front of him hurriedly moved away from their chairs.

According to MynewsGhana.net correspondent, the suspects who pleaded not guilty to charges were granted bail of N200,000 and one surety each. The Magistrate Olusegun Ayilara subsequently adjourned the matter till May 13.

There are 20 confirmed cases of Coronavirus in Osun state, out of the 373 cases in the country.

Previous Lockdown: The church is not an NGO to provide free food for its members – Prophet Kofi Oduro
Next 2020 May day Celebrations put off