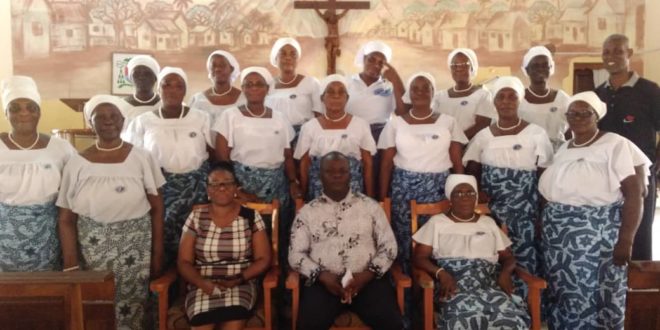 The Christian Mothers Association – Ghana with support from  Konrad Adenauer Stiftung has trained Peace Ambassadors in the  Keta- Akatsi Diocese of the Roman Catholic Church.

The day’s training workshop under the theme “Women Partnering in the Election Process: A Credible and Violence Free Election 2020” had in attendance members of the Christian Mothers’ Association strategically selected from parishes within the Keta- Akatsi Diocese.

The trained Peace Ambassadors are obligated to spread the message of peace before, during and after the 2020 General Election in their deaneries, parishes and groups.

The Executive Secretary of association, Mother Olivia Ansu Amponsah in her open remark, stated that Ghana has gone through numerous Voter Registration Exercises peacefuly but the recent one recorded few violence incidents that even resulted in the death of some citizens.

She added that those violence incidents has prompted the Association to embark on the mission to train some selected mothers of the Association as Peace Ambassadors and deploy them for the purpose of carrying out Civic Education and preaching Peace.

Mother Emily Agozie, chairperson of the Keta-Akatsi chapter of the Association stated that the Association is equipping the Christian mothers with the needed knowledge to preach peace to the gallant and energetic youth of the country who may be used by some politicians to perpetrate violence during the upcoming general elections and to urge them not to give in to such acts.

Rev. Vincent Adzika, the District Director of the Akatsi South Office of the NCCE took the trainees through the following topics; The Active Participation in the Electoral Process, the Role of Women as Peace Ambassadors; The Local Government System and Good Citizenship; Public Speaking and Community Entry; The Functions of the three Arms of Government. etc.

Rev. Adzika congratulate the trainees for accepting the challenge and encouraged them to give off their best for the peace of the country Ghana.

Mr Jordan Dzikunu, a retired staff of the NCCE, in his presentation challenges the mothers to make themselves available for leadership roles in both political or social context when the need arises.