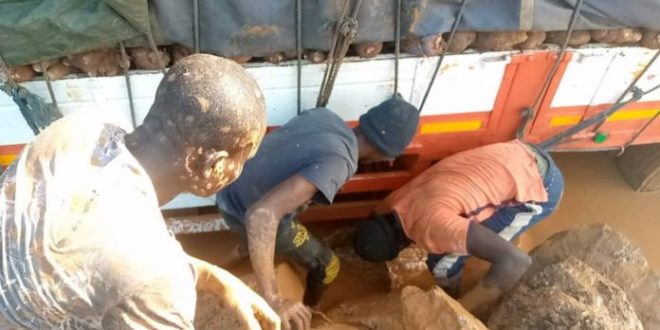 Chief of Manso Agroyesum in the Amansie South District in the Ashanti Region, Nana Tabi III, nearly met his untimely death due to bad roads.

This was after he fell off his motorcycle in an accident on the Agroyesum-Kumasi main road.

Recounting his ordeal, the chief explained how the poor nature of the road nearly took his life.

“I was travelling on a motorcycle Wednesday evening when we got to a point the bike nearly stuck in the mud and slid. We fell off, I broke my ankle and sustained several bruises not to talk of how the motorcycle fell on me,” he narrated.

The chief indicated that since he ascended the throne he has never seen an asphaltic road in his area.

“We are patiently waiting for a politician who will come here to campaign for votes. We will drive them away, we have been voting for NPP since the days of [former] President Kufuor but we have nothing to show off, our roads are very bad,” he lamented.

The poor nature of the road has been taking a toll on quality health delivery as ambulances hardly make it on the road when there’s the need to refer patients from Agroyesum to Kumasi and other referral centres.

Nana Tabi III further made clarion calls to authorities as matter of urgency to fix the road to avoid fatal accidents from recurring.