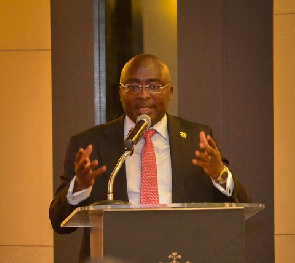 The Ejura-Sekyedumase Constituency Secretary of the opposition National Democratic Congress(NDC) Okai Attakorah Gibson has urged Vice President Dr Mahamudu Bawumia to apologize to Ghanaians over his inability to stabilize the cedi.

According to him, the Veep as the head of the country’s Economic Management Team has failed to honour his campaign promise prior to the 2016 election of stabilizing the cedi against the dollar when the New Patriotic Party (NPP) is voted into power.

Dr Bawumia, in 2017 publicly announced that he had arrested the dollar and had handed the keys to the I. G P.

The cedi has seen its value go down significantly over the past weeks reaching around ¢5.50.

Okai Attakorah Gibson in a statement urged the Dr Bawumia to prefer practical solutions to stabilize the dollar.

“Just yesterday, I overheard the first gentleman of the country complaining that he is upset over the cedi depreciation. This is unacceptable and unimaginable as we still have the head of the economic management team who sometimes ago deceived Ghanaians about his economic theories.

“Where are the answers to the over 170 questions that he set for late vice president Paa Kwesi Amissa Arthur. Where has those theories evaporated to? I even wonder if our Vice President is still in the country to witness now the dollar is galloping. To be on the safest and honest side Dr Mahamoud Bawumia should come out and apologise to Ghanaians or resign as the head of Ghana’s economic team.

Okai Attakorah Gibson added, “Ghanaians need a practical economist to lead the country and not a theoretical economist who cannot even stabilize a simple dollar.”

Previous Alabi, Bagbin, others pledge support for Mahama
Next Former Brazilian president to be released from prison for grandson’s funeral