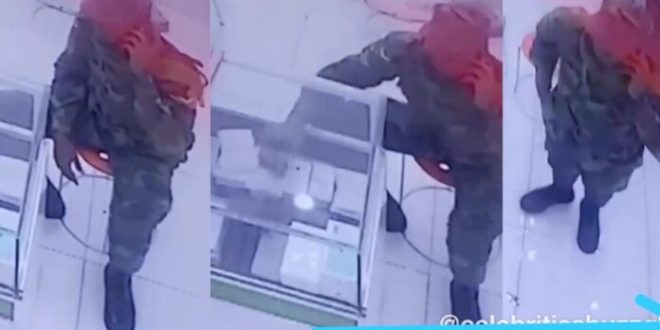 A Ghanaian soldier has been captured on a video footage for allegedly stealing iPhone 11 Pro at a phone shop.

Per the video intercepted by mynewsghana.net, the soldier man covered his head with a military cap and scarf while carrying out his operation.

As smart as he is, he appeared to be on phone speaking to someone but he was using that as a trick to see if the shop attendants were eyeing him.

Securing the chance, he quickly snatched the phone which was placed on exhibitions and put it into his side pocket and right after, he left the shop.

Probably he might think his stars are so lucky, not knowing all his moves have been recorded by the CCTV

Previous VIDEO: Two killed in an accident at Offinso, others critically injured
Next SAD VIDEO: Pamela weeps bitterly as she rains curses on Nayas