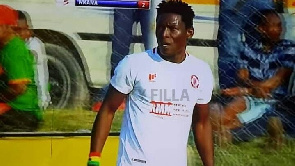 Nkana FC’ Ghanaian defender, Richard Ocran says his outfit are ready to lock horns with Asante Kotoko and reiterates that there is no special preparation to beat the Reds.

The 25-year-old insists his club sees the match against the Porcupines as any other match which will be played for 3points and there is no special training to face them but they will taste defeat on Sunday.

According to the former Dreams FC and AshantiGold defender, all the teams in Group C have amassed 3 points in the opening two games which shows Nkana FC is a force to be reckoned with in the competition.

He further cautioned Kotoko that they will be laughing at the wrong side of their mouth if they underestimate them because they lost the local derby 2-0 at the Nkana Stadium against Power Dynamos.

The Porcupines are guests to Nkana in the match-day three encounter of Group C in the continent’s second-tier inter-club competition at the Nkana Stadium in Kitwe on Sunday, February 24, 2019, at 1:00 PM local time.

The Porcupines are hoping to end the first round of the group stage on a high against the Zambians who they play again on March 3, 2019, in Kumasi in the opening fixture of the second round.