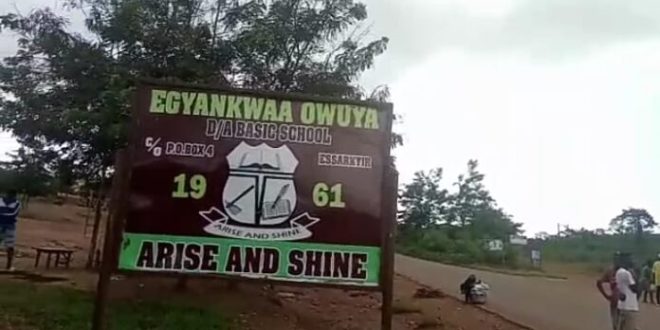 C/R: Headteacher bitten by snake while easing himself on school farm

The Headteacher of the Ekumfi Egyakwaa Owuya D/A Basic School has suffered a snake bite while easing himself on the school farm near a bush in the Ekumfi District of the Central Region.

Information gathered by Kasapa News Yaw Boagyan indicates that the Headteacher Mr. Luis Abban decided to attend nature’s call in the bush because the school has no toilet facility but unfortunately stepped on the snake and was bitten.

A female student who was also easing herself in the bush is said to have heard the headteacher screaming for help and hence rushed toward his direction only to find out that he had been bitten.

She then hurriedly ran and informed the rest of the teachers who rushed to the school farm and picked him to the hospital for treatment.

The victim is currently in stable condition.

Meanwhile, it has emerged that this term, five pupils have been bitten by snakes, an issue which has become a great source of worry to the school management.

The school which was established in 1961 has never had a toilet facility which makes both the teachers and the students always ease themselves in the bush always.

“We always meet our teachers trooping out from either the school farm or bush where we all ease ourselves,” a pupil said.

They are, therefore, appealing to the government, the Chief of the town, the District Chief Executive for Ekumfi District, and the Member of Parliament to support the school with a toilet facility in order to prevent further snake bites.

Previous VIDEO: Chief, 3 ex-soldiers arrested in Kwahu over galamsey activities
Next Sad video drops as Mzbel opens up on why she never married