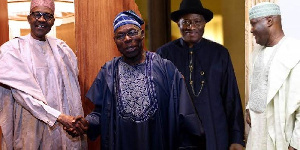 The President Muhammadu Buhari-led Nigerian government has designated the sum of N13,805,814,220 in the 2023 appropriation bill for the payment of pensions to former Presidents, Vice-Presidents, Heads of State, Chiefs of General Staff, retired heads of service, permanent secretaries, as well as retired heads of government agencies and parastatals in the 2023 fiscal year.

In the list of beneficiaries are former Presidents Olusegun Obasanjo and Goodluck Jonathan, as well as Vice-Presidents Atiku Abubakar and Namadi Sambo.

It was stated in the budget that a total of N2.3bn would be for “entitlements of former presidents/heads of states and vice-presidents/chief of general staff”.

An analysis of the proposal revealed that a total of N10.5bn would serve as “benefits of retired heads of service and permanent secretaries.”

The budget also revealed that a total of N1bn would be paid as “severance benefits to retired heads of government agencies and parastatals.”

At the state level, governors and their deputies are also entitled to humongous pensions when they leave office and a number of former chief executives of the various states are known to be beneficiaries of the huge pensions, which include monthly payment, purchase of new vehicles, building of mansions and payment of domestic workers.

Omoyele Sowore, the presidential candidate of the African Action Congress (AAC) had described the 2023 budget as illegal.

Meanwhile, Sowore, while reacting to the deficit in the budget during his speech at the national conference organised by the Institute of Chartered Accountants of Nigeria (ICAN) on Wednesday, explained how the 2023 budget breached the constitutional provisions and other enactments.

The human rights advocate described the Appropriation Bill as unsustainable, claiming that the deficit has surpassed the 3% required by the Fiscal Responsibility Act 2007.

He said, “I had made a promise that I would not talk about any other candidate but myself. So I want to thank the leadership of ICAN for demonstrating better judgement than the Nigerian Bar Association who did not invite the rest of us. But having said that, I also want to congratulate those of you who made a bet today that one candidate will not show up. Congratulations, you won. And the candidate that did not show up is supposed to be an accounting guru from Chicago state university but he refused to show up at the most important accounting event in Nigeria today”.

“The country Nigeria and the future of Nigeria cannot continue to live or expect unsustainable candidates in 2023. You guys are aware that the president of Nigeria just presented a budget a few days ago. I wasn’t an accountant. But I went into that budget and looked at it legally.

“I discovered that it is an illegal budget. The budget violated Section 12(1) of the Nigerian Constitution. By way of the Fiscal Responsibility Act 2007 which says explicitly that the deficit to GDP ratio in the national budget must not be more than 3%. We are now at 5%. That is unsustainable,” he added.