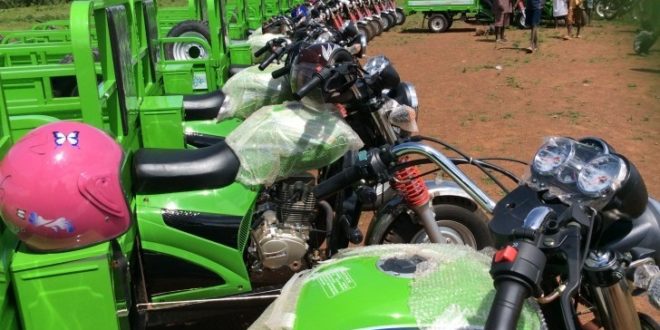 Aggrieved youth of the New Patriotic Party (NPP) within the Tamale Metropolis on Monday morning besieged the offices of the Northern Development Authority (NDA) to forcibly seize tricycles parked within the main yard.

According officials of the NDA who spoke to MyNewsGh.com on grounds of strict anonymity, the youth numbering over 100 forced their way into the yard and insisted on taking the tricycles because they were promised by some appointees in the current government they failed to name.

They faced fierce resistance by the security men manning the main entrance who for the safety of their jobs, insisted they followed the laid down procedures if indeed they wanted the tricycles which were procured under the defunct Savannah Development Authority (SADA) and given to interested persons on hire purchase.

When all attempts to forcibly seize the items failed, they moved together to the Northern Regional Police Headquarters where they were said to have gone to solicit the assistance of the police in taking the tricycles that have also been left for months under the mercy of the weather.

Mohammed Alhassan Ghana, Regional Youth Organiser of the NPP who confirmed the incident to MyNewsGh.com, observed that the youth had earlier registered their interest in acquiring the items but were asked by authorities to form a registered association which is a prerequisite for beneficiaries which they did.

He explained that after meeting the demands of NDA, authorities appeared unwilling to give them the tricycles with reports suggesting there were attempts to auction them in the quiet which may have informed the latest action of the youth.

The NPP Regional Executive however explained a meeting has been scheduled between management of NDA and the party’s youth to resolve the impasse.