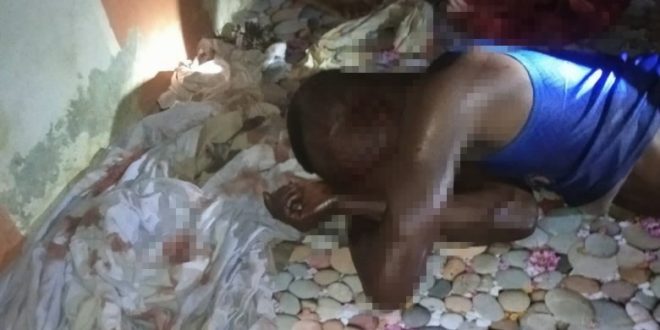 A Jilted husband has shot his 40-year-old rival, a year old child, and an eyewitness over a woman.

The incident happened Sunday morning at Gomoa Akotsi in the Gomoa East District of the Central Region, according to Bright FM Central Regional Correspondent Eric Amponsah.

The injured rival was reportedly dating the wife of the suspect. The Woman allegedly told the victim she was a divorcée.

The angry husband trailed, lurked, and opened fire at them while in their newly rented room but the woman escaped unhurt.

Sadly, a one-year-old child in the room was hit by a bullet.

The suspect subsequently shot an eyewitness who shouted for help.

The three victims have been rushed to the hospital.

A witness Kojo Attah who conveyed the victims to the Village of Hope Hospital in Gomoa Fetteh and Winneba Trauma as well as Specialist Hospital revealed that the suspect shot into the head of his rival twice but mis-fired the woman.

He said the victims were in critical conditions when rushed to the hospital.

Meanwhile, the Landlady of the house where the bizarre incident occurred-Efua Broni was scandalized.

She explained that the victim and the woman rented the room and settled in the house four days ago.

The Gomoa Ojobi District Police Command was yet to arrest the suspect who was at large. Residents of New Kyekyere, a suburb of Kronum in the Suame Municipality of the Ashanti …