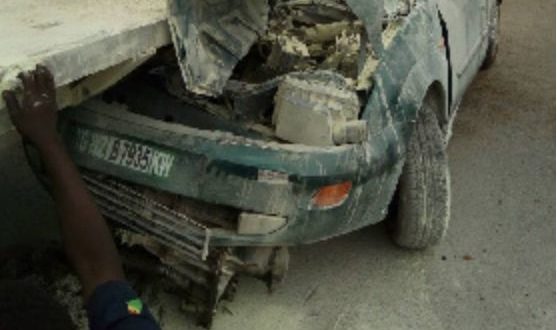 The driver and the conductor who were in the tipper truck that got involved in an accident between Beposo and Asemasa in the Shama District of the Western Region, claiming 14 lives on the spot, are currently receiving treatment at the Central Regional Hospital.

Police say the two were able to escape after the head-on collision but sustained serious injuries and were rushed to the hospital.

The Western Regional Police MTTD Commander, Chief Superintendent Isaac K Sorkpah, who made the revelation known to 3FM Sunrise on Wednesday, explained that “so far, 14 people, made up of 10 males, four female, including one Chinese national and a small child were burnt beyond recognition.

“The mate was in a coma and the driver was in very critical condition so they were rushed to the hospital,” he told Sunrise host Alfred Ocansey.

Chief Supt K Sorkpah explained that “the police contacted the station where the Ford was from, which was Tarkwa, for them to assist the police in identifying the victims and they confirmed the passengers were 13, and a driver, making 14 onboard the Ford.

“We are in contact with [the transport union in Tarkwa] to help us to identify the victims.”

The MTTD Commander explained that “the tipper truck driver when he got to the first town in the Western Region, Beposo, from Cape Coast, one of the front tyres burst, so he veered off his lane into the lane of the Ford…which was coming from Tarkwa to Cape Coast.

“The truck was carrying huge stones so it fell on the Ford and it caught fire. The driver of the truck and the mate were able to run out of the truck and they were rushed to Central Regional Hospital, Interbrton where they are currently receiving treatments because they were injured seriously.”

Asked whether there was no fire station around the vicinity where the accident occurred, Chief Supt K Sorkpah explained that “we had firefighters from Elmina, Daboase and Komenda at the scene to fight the fire.”