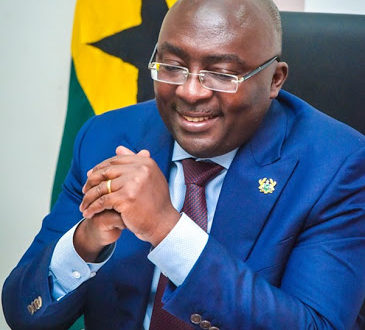 Bawumia sworn in as Vice President of Ghana for second term

Dr Mahamadu Bawumia has just taken his oath of office as Vice President of the Republic of Ghana for a second term.

Having partnered Nana Addo Dankwa Akufo-Addo as his running mate for the 2020 presidential election, Mr Bawumia is once again going to work for another four years with Nana Addo.

He was born on October 7, 1963 in Tamale to the late Alhaji Mumuni Bawumia, former Chairman of the Council of State (1992–2000) and Hajia Mariama Bawumia. Bawumia’s father Alhaji Mumuni Bawumia was a teacher,lawyer and politician, a Mamprugu Royal and Paramount Chief of the Kperiga Traditional Area at the time of his death in September 2002.He was a founding member of the Northern Peoples’ Party alongside Chief S. D. Dombo, Chief Abeifa Karbo, Yakubu Tali, the Tolon Naa, and J. A. Braimah, Kabachewura.

The Northern Peoples Party,together with the National Liberation Movement and other opposition political parties later merged into the United Party, the forebear of the current New Patriotic Party. Alhaji Bawumia served under various Ghanaian governments in various capacities, including member of the Northern Territories Council, the Gold Coast Legislative Assembly,a Member of Parliament of the First Republic, Northern Regional Minister,and Ghana Ambassador to the Kingdom of Saudi Arabia.

Alhaji Bawumia was in March 1999 awarded the highest national honour, membership of the Order of the Star of Ghana. Mahamudu Bawumia’s mother, Hajia Mariama Bawumia, is a native of Kpasenkpe in the West Mamprusi District. She was one of the first northern female students to gain admission to Wesley Girls High School, Cape Coast.

Education Born into a large family, Mahamudu Bawumia was the twelfth of his father’s 18 children and the second of his mother’s five. Mahamudu Bawumia attended the Sakasaka Primary school in Tamale, and gained admission to Tamale Secondary School in 1975. He was President of the Ghana United Nations Students’ Association (GUNSA) for 1981. After graduating from Tamale Secondary School, he went to the United Kingdom where he studied banking and obtained the Chartered Institute of Bankers Diploma (ACIB). He took a First Class Honours Degree in Economics at Buckingham University in 1987. He then obtained a master’s degree in Economics at Lincoln College, Oxford, and obtained a Ph.D. in Economics at the Simon Fraser University, Vancouver, British Columbia, Canada in 1995.

His areas of specialization include Macroeconomics, International Economics, Development Economics and Monetary Policy. He has numerous publications. Work experience From 1988 to 1990, Bawumia worked as a lecturer in Monetary Economics, and International Finance at the Emile Woolf College of Accountancy in London, England. He also served as an economist at the Research Department of the International Monetary Fund in Washington, DC, USA.

Between 1996 and 2000, Bawumia served as an Assistant Professor of Economics at Hankamer School of Business, Baylor University, Texas, USA, where he also received the Young Researcher Award in 1998. He was listed in “Who is Who Among America’s Teachers’ in 1999. Bawumia returned to Ghana in 2000 to work as an economist at the Bank of Ghana. He rose from Senior Economist to Head of Department, and subsequently as Special Assistant to the Governor of the Bank. President J.A. Kufuor appointed Bawumia as Deputy Governor of the Bank of Ghana in June 2006.

The inflation-targeting framework established reduced inflation from over 40% in 2000 to 10.2% by 2007 (i.e., before the oil price shock of 2007/2008) while maintaining relative exchange rate stability. Was part of the team that was instrumental in designing and implementing policy initiatives such as the abolition of the secondary reserve requirements and the opening up of the banking sector to competition. This resulted in a major increase in the availability of credit to the private sector from 12.5% of GDP in 2001 to 28.5% of GDP by 2008.

Led Bank of Ghana’s technical negotiation team and was on the government team that negotiated with the World Bank and International Monetary Fund since 2001 through HIPC and PRGF. Partly as a result of these negotiations, Ghana by 2007 successfully ended its dependence on IMF assistance. Served as a member of the Government technical negotiating team on HIPC Paris Club and Completion Point Negotiations. Ghana completed the HIPC process successfully with significant debt relief of close to $4 billion. He was a member of the Government Team to Negotiate the Millennium Challenge Account Compact with the US Government. The MCA resulted in many significant projects such as the recently inaugurated George Bush Highway. He Was a member of the Government Technical Team on the Deregulation of Ghana’s Petroleum Sector.

As Chairman of the Capital Markets Committee, was responsible for the strategy for accessing the international capital markets with a debut US$750 million, which was four times oversubscribed. Was part of the team that designed and implemented the successful redenomination of the cedi. Through this process, the cedi was considerably strengthened. Significant savings were also made by the Bank of Ghana in currency printing costs. He Was involved in the design and implementation of the e-zwich common platform for all banks,savings and loans companies and rural banks, offering interoperability across different financial institutions.As the deputy Governor in charge of financial stability,oversaw the soundness of the banking sector.

As Deputy Governor Bawumia served on the Boards of the Bank of Ghana,Ghana International Bank (UK) Ghana Telecom,Revenue Agencies Governing Board, Social Security and National Insurance Trust. Shortly after the 2008 election Bawumia resigned as Deputy Governor at the Bank of Ghana. 2008 elections Mahamudu Bawumia was running mate to the New Patriotic Party candidate in the 2008 elections, Nana Akufo-Addo.The NPP increased its share of the vote compared to 2004 in all the three Northern Regions,in both the first and second round. 2008–2011 Bawumia served as a Consultant to the Economic Commission of Africa between February and March 2009. Between April and October 2009, he was a Visiting Scholar at the University of British Columbia Liu Centre for Global Studies and UBC Fisheries Centre.

In October 2009, he was appointed as a Fellow of the International Growth Centre (IGC), a research institute based jointly at the London School of Economics and Political Science and Oxford University that provides advice on economic growth to governments of developing countries, specifically serving as an IGC Team Member for Sierra Leone. He also served as an Advisor to the Central Bank of Sierra Leone on the redesigning of the organizational structure of the Bank and its monetary policy framework.

Between October 2009 and October 2010, he was a Senior Research Associate at the Centre for the Study of African Economies, University of Oxford, Department of Economics. In January 2011 Bawumia was appointed Resident Representative of the African Development Bank for Zimbabwe by the African Development Bank. He served in this position until reappointed as the Vice-Presidential Candidate to Nana Akufo-Addo on the ticket of the New Patriotic Party for Ghana’s 2012 Presidential Election. 2012 elections Bawumia was re-nominated as the Vice-Presidential Candidate to Nana Akufo-Addo for the 2012 General Elections in March 2012. The Party won ten (10) seats in the Northern Region including Yendi, Walewale, Yagaba – Kubore, Bunkpurugu, Bimbilla, Chereponi, Kpandai, Tatale – Sanguli, Tolon and Zabzugu. It also won the Nabdam and Talensi Constituencies in the Upper East Region. Overall, Nana Akufo-Addo and Bawumia lost the Presidential Elections to incumbent John Dramani Mahama.