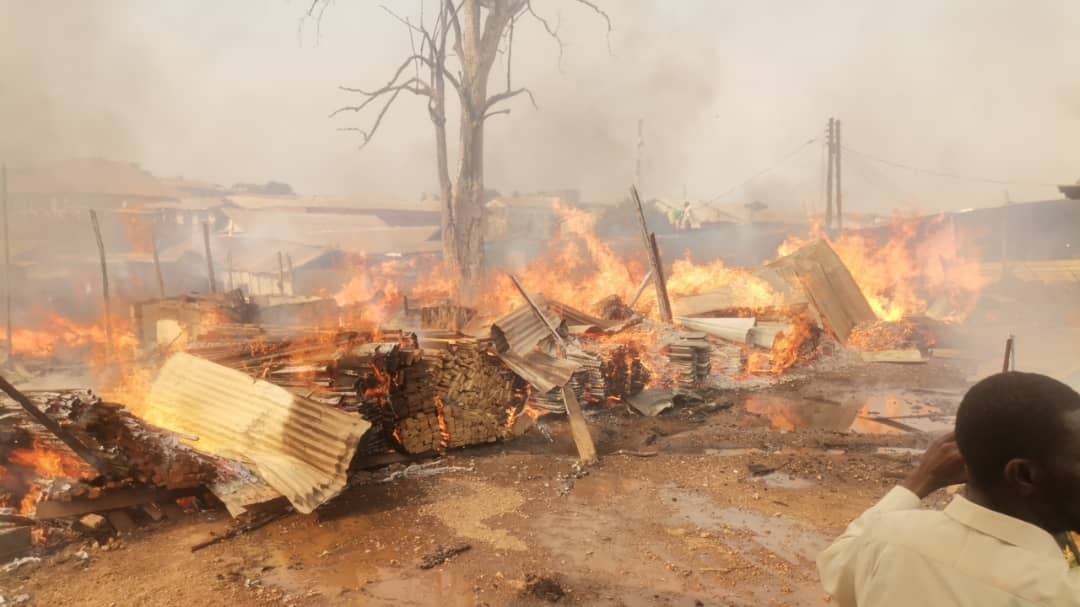 Share
A deadly fire Outbreak has razed down several shops Asawasi Bombay, a popular wood market in the Asokore Mampong Municipality of the Ashanti Region.

The fire started around 9am on Thursday morning destroyed over 30 shops. The cause is still unknown.

The fire disaster which occurred on Thursday February 3, 2022 destroyed over 30 shops which according to the dealers worth over GH¢100,000 of goods.

“We have lost a lot, our shops and goods and the amount involved is so huge that I do not know how we can start all over again”

“Three huge sawmill machines costing GH¢20,000 have been wretchdd by the fire, we did our best to fight the blaze but it was too hot for us “He cried.

Report from the scene indicated that over four fire tenders were deployed to the area before the fire was brought under control.

Meanwhile Preliminary investigations by the  Ghana National Fire Service GNFS have disclose that the   fire was sparked by burning of garbage in the area.

The  Commander for Manhyia Fire Command DO1 Amos Abban said they have launched thorough investigation into the matter.

He called on residents in the area and the affected victims to volunteer any information that will help them come into a better conclusion in their investigations.

Previous Here is the Ghanaian writer who co-authored Marcus Rashford’s book,
Next Why GFA wants to appoint Otto Addo as Black Stars coach