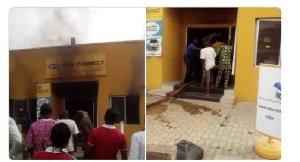 The comment comes after protesters in Turffontein, Johannesburg, looted shops as they demonstrated in the area on Monday morning.

They targeted shops they believed to be owned by foreign nationals and as a result burnt tyres, human beings in the streets and also forced passengers out of at least one taxi.